Infinix Hot 8 has a couple of upgrades now compared to its predecessor the Infinix Hot 7. For example, the Hot 8 is slightly heavier than the Hot 7 and other devices within its price range.

And this is as a result of the large battery that comes with the device, but despite the weight, the Hot 8 still looks better than other devices in a similar price bracket.

Now, depending on how you see it, whether as an upgrade or not, but Infinix switched from a plain plastic build to a glossy gradient finish. As a result, the device is pretty slippery and attracts way more fingerprint stains than most smartphones.

On the back of the device, you now have a triple camera setup an upgrade from the dual cameras on Infinix’s previous smartphones.

However, if you were expecting a telephoto or a wide-angle lens, well hold your horses. The smartphone comes with a 13MP primary camera, a portrait lens camera, and finally, you have the QVGA camera. I wonder why Infinix included that to the mix. 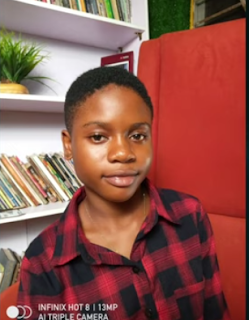 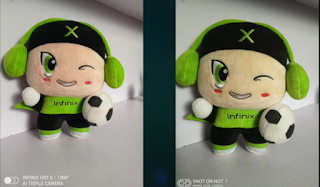 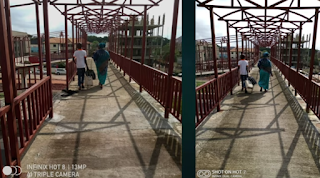 Less I forget, you get the same camera layout on most Infinix devices, but Infinix added AI shots to the modes, but that is not to say that some people out there wouldn’t like it.

Anyway, you can record videos on the Infinix hot 8 in 1080p, and as expected, there’s no form of stabilization. I love the fact that Infinix always includes a grid and a leveler in their camera application which could help monitor the camera shakes.

Switching to the front of the hot 8, you now have the teardrop notch that you can always hide. I’m not sure why you would want to do, though.

But there’s also a notification LED which serves as the front flash and the bezels on the device still look the same as the Infinix hot 7.

One thing you will love about the hot 8 is how tall the display looks, especially when compared to other brands in the budget segment this year. 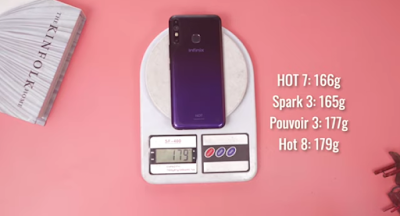 Moving away from all of that, you still have the SIM card, a micro SD card slot that has been placed to the left and supports 4G LTE, but I’m not sure if it supports GLO 4G. I’ll be putting that to test in my full review, so be on the lookout for that.

Anyway, there’s a volume rocker and power button to the right, on top there’s nothing but beneath you have the speaker grids, the micro-USB port.

During my test, it took me about three hours to charge from zero to a hundred, which is surprisingly not that long because this comes with a 5000mAH, and that is a breakdown of how long it takes to charge fully.

Talking about battery capacity, I used the Hot 8 through the day and still have some battery juice left that could have taken me throughout the next morning.

It takes about 28 seconds to power on this hot 8, placing it right below the Infinix s4 on the leader board. Now once you power it on display comes into play obviously, and sadly it is a 720p display.

I wasn’t expecting anything more significant, so I’m not disappointed because the price of the Infinix Hot 8 is 37,000 NGN.

But I must say that I like the colour tone on this device. It looks slightly brighter than what you get on the Hot 7 or say the Spark 3.

Software and storage of Infinix Hot 8.

Now you get the latest XOS that comes preloaded with a lot of ads bloatware application. You can uninstall some of these applications, but others cannot be uninstalled.

Talking about pre-loaded installation, I like the fact that Infinix is using files, that is, the one from Google as their official files manager. 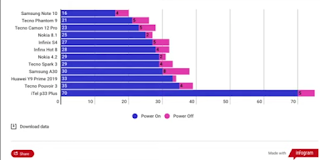 For one, it is quite light coming in at 7MB, and it is also quite efficient than most in-built file manager applications, and once again, Google owns the app, so it flows seamlessly with other applications.

On the storage aspect of the Infinix Hot 8, you’d have approximately 24GB available storage to use. You also get a face to unlock to go with the fingerprint sensor.

Still, on the UI, you can choose to customize the navigation button. There’s the game mode on it, and finally, you have the Dirac to optimize the audio as well as other little tweaks that you can do on the Infinix hot 8.

The last thing to talk about is the processor. The Hot 8 comes with the Helio P22 processor along with 2GB of RAM, which is quite underwhelming, but once again, the price tag of the device is the saving grace.

As you’d expect, there’s a lot of noticeable lags when playing intensive games. I wasn’t even able to run the Antutu benchmark on the device, but good note, the Infinix Hot 8 is quite ok with handling light applications or games.

InfinixArena is a tech based company originally created for Infinix mobile. along the line, request grew from users for more categories.

How to Clear Your Browsing History on Chrome for Android

This website uses cookies to improve your experience. We'll assume you're ok with this, but you can opt-out if you wish. Accept Read More